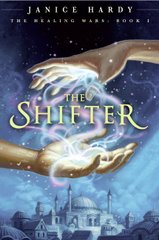 I got a chance to interview debut YA fantasy author Janice Hardy for The Enchanted Inkpot blog this week, and I was so thrilled with her thoughts on the writing process and the genesis of THE SHIFTER that I thought I’d link to it here, for those of you who wouldn’t have visited the Inkpot otherwise. Here’s the introduction:

“One of the most original books I’ve read in a while is THE SHIFTER, by debut novelist Janice Hardy, so I was delighted when Janice granted The Enchanted Inkpot an interview.
THE SHIFTER is the first book in THE HEALING WARS series and tells the story of 15-yr-old Nya, an orphan who has the power to shift pain from one person to another. Her homeland, Geveg, has been invaded by the Baseer, and in this oppressed world the ability to shift human pain into a substance called pynvium is worth money. Big money. The League charges to remove the pain, pain merchants buy pain to enchant weapons, and anyone able to ‘shift’ pain is subject to death, pain, and maybe even experiments. So Nya suppresses her power to shift, but then her sister Tali and other League apprentices disappear. Forced to use her power to find and free her sister, strong-willed Nya is faced with the complex moral dilemma of deciding who will live, or die.”
Want to know more? Then hop along to The Enchanted Inkpot for the Q & A with Janice.
Share