Do You Keep an Idea Bank?

I received an interesting question from a writing friend on Facebook today which I wanted to share with you because I’m sure we’re not the only two writers to have struggled with this:

“Lia, my novel keeps changing, the story keeps evolving, and I’m losing all sense of control. I don’t know how to keep track of all the smallest ideas, the ones that I need to keep, the ones that go but then should come back…
At least I got everything in a single folder, and most of it in the Liquid Story Binder but still… I’m trying to plan the nth draft and got stuck at end of Act 1. I don’t know how to follow without loosing richness of details of first act.
So, question is, how do you keep track of everything? “

I think that part of this is due to the combination of an active imagination and the impatience one feels with the length of time it takes to write a novel.

While we are working on a novel, our minds don’t stop creatively, so we’re always wondering if we could or should change what we’re doing and call it evolution. That’s one reason why it has taken me five years to write my book.

The truth of the matter is that, if I’m totally honest, the first idea I had five years ago was good enough already. I could have written four more books since then, each of which could have explored one of the new ideas or characters that crept in during the writing process.

The trick is to know what to put in and what to save for later. I’ve discovered the hard way that nailing down the premise of the book early and sticking to it is the best way to go. Once you’ve sold the book, editors still want changes, or ask for one element to be made stronger and for another to fade into the background more. They ask for more characters, or deeper characterization of a particular character. If you’ve kept a folder for CHARACTERS and created a document (or several documents in a sub-folder) dedicated to each character, then you can go back and all those ideas are there, waiting to be used. Like savings in the bank.

You don’t have to spend them all at once.

Same goes for world-building, story ideas, scenes. Create an IDEA BANK and as many sub-folders within that to satisfy your need to record every gem.

But be judicious about how many you use in your first book. Throwing everything you’ve got at one book may just muddle the reader.

You may be doing this because you don’t think your story is cool enough, or big enough, or flashy enough. The premise is the key. If the character is interesting, has an interesting problem, forms a plan that you want to watch them implement, encounters opposition from a fascinating antagonist, comes to terms with the flaw in their first plan, forms a new plan, succeeds, and goes forward to a new life enhanced by that growth, then you have something.

In throwing the kitchen sink at the manuscript you may be avoiding the fact that the conflict isn’t interesting enough to you, or the antagonist isn’t. A good conflict/opposition/antagonist is the engine of the story. If you feel you don’t have enough to keep the reader turning pages, I would look at the conflict/opposition/antagonist for answers. Work on their motivation and the rest will fall into place.

With a strong premise you can judge whether each new idea/character that comes to you will help to move the story forward. If the story is already moving just fine, save the extras for book two. Or another book entirely.

As for how to organize the bank, there are as many ways as there are writers. Some use programs like Scrivener or Liquid Binder. Some just use Word folders and documents. JK Rowling used a combination of notebooks and cardboard boxes filled with loose bits of paper. How you store the information isn’t as important as how you choose what to use.

That comes back to creating some kind of outline where you keep track of what has to be included in each chapter. Some writers can’t do this in advance. They have to write the first draft, then outline what exists, then move it around and augment it during the second draft.

And don’t give up! You’ll get there. 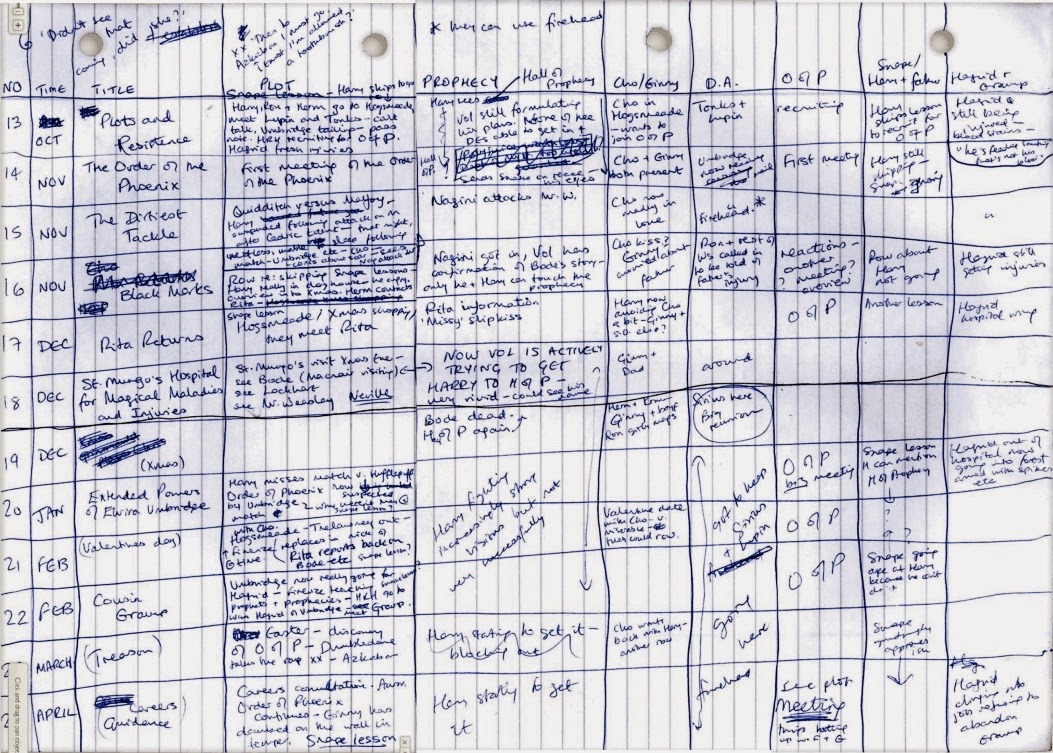 Now it’s your turn—how do you organize your ideas?