So What DO Teen Boys Read? 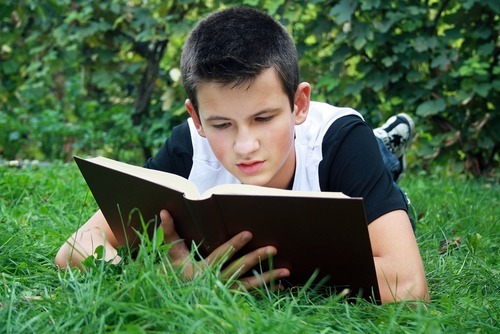 Boys love stories loaded with facts, they love understanding how things and societies work, and they love stories in which mettle is tested, with bad-ass heroes capable of graveyard humor in the midst of battle, and fast-paced action—but that’s not all. The most satisfying stories for boys are those that also analyze the significance of that action. Stories with high stakes, and clear and important goals. But all too many YA books are wishy-washy yearning books, their focus hinging on goals boys have no interest in.

Although there are some YA books they can read without puking, and even some they can carry without covering them in brown paper, there are few that actually engage them. They have no problem reading about a female protagonist, if that female protagonist has important goals and isn’t spending too much time pining for a guy en route to accomplishing them.

A female protagonist who has goals of consequence and has trouble keeping her mind off a boy’s anatomy might be closer to the mark, but who’s going to write that? Boys do yearn to be loved and understood, but they also yearn to be touched in a carnal, physical way by a real girl—they don’t yearn for an idea of femininity that can only exist on a supernatural plane.

So what are the preoccupations and insecurities of the average teenage boy? Books with boy protagonists need to relate story obstacles to peer pressure, shame, acceptance, performance anxiety, the weight of responsibility to look after people they care about, gaining power, how to handle it, and fear of the consequences of not gaining power. Are you seeing the difference?

They are focused on different issues than girls are, though some intersect. And that’s why slapping a more neutral cover on a girl book to get boys to read it isn’t going to wash. The content needs to deliver on the cover’s promise.

Boys need and deserve books addressed specifically to them, to overcoming the fears or ‘monsters’ that bedevil them. For what are great stories if not a vicarious exploration of one’s deepest darkest fears, vanquished by an unlikely but ultimately worthy hero?

If we agree that YA literature should address boys’ monsters, too—not just girls’—what form might a teenage boy’s monster take? What is the male fantasy equivalent of dangerous boyfriends of the supernatural persuasion? Or, if we’re staying with contemporary fiction, what are the average teenage boy’s deepest, darkest fears?

As an uncontrollable lust metaphor, vampires and werewolves are hard to beat. But controlling desires is not the only problem teenage boys have to handle. What other problems can writers allow boys to explore through a metaphorically physical manifestation that must be tamed or vanquished by story’s end? And is there a subconscious reason why teenage writing phenomenon Christopher Paolini chose to make his dragon in ERAGON female?

Do the majority of teenage boys leave their MG love of fantasy behind and look for more realistic, contemporary or historical fiction as they adjust to adult life?

One thing is for sure, teenagers of both sexes are still trying to find their place in the world. It’s a quest for an identity that fits just right. They try on all sorts of identities during their search for the right one. So the questions become “Who am I, really?” “Do I have a choice about that?” and,  ultimately, “Who do I want to be?”

There’s a fear of making the wrong choices and finding yourself on a fast train to the wrong destination (with regard to which subjects to choose, which uni to apply to, what kind of job/wife/life/fate/destiny will await you). Terrifying indeed.

Teen years are also when the scales fall from our eyes with regard to our parents. We don’t idolize them anymore. They don’t have all the answers. The sobering truth is, we have to save ourselves. We fall out of love with them for a period and there’s loss involved in that until we fall in love with them again as people, instead of icons.

There’s so much going on in a teenager’s heart and mind, and it’s all so Romantic in spirit (as in Romantic Movement in literature). There’s sweep and drama, black and white, and very little grey. There’s passion and idealism and hope and fear.

And that’s why I love it so much. And why writers who don’t adequately plumb its depths, or fail to understand who they’re writing for, annoy me so much.