One of my favorite books of 2009 was Arthur Slade’s THE HUNCHBACK ASSIGNMENTS, so when Shelley Souza interviewed Arthur, I asked if she’d mind sharing their conversation here to spread the word. We need more books like these. Books where the protagonist isn’t perfect. Books where his greatest gift (the ability to change his shape into any form) is also the protagonist’s greatest challenge, in this case because Modo can only hold an assumed shape for a limited time before he returns to his deformed self. 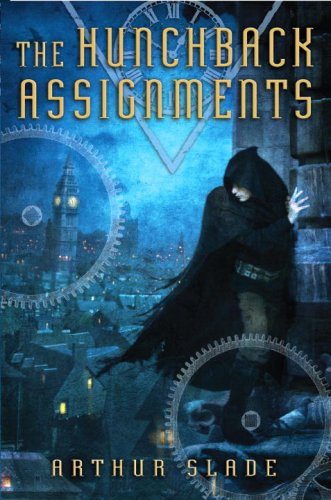 Shelley: A recent interview said that The Hunchback Assignments is inspired by Victor Hugo’s Huchbank of Notre Dame, and that the second book in this seven-part series found inspiration from Jules Verne’s 20,000 Leagues Under the Sea. Was that your aim, to reinterpret classics that fit with the growing movement of steampunk in fashion, literature and art?

Q: What would you say to young (or old) writers who aspire to be novelists when they grow up?

AS: I, personally, feel extremely lucky to be writing novels for a living. So on one level I’d highly recommend it to everyone who is interested  in writing. That said I know that the market is extremely tough to get  into and it’s also very hard to become a writer full time. My best advice is that if you truly love it you should write a little bit every day. You’ll be surprised how quickly a novel or short story will come together.

For more information about Arthur, visit his website at www.arthurslade.com