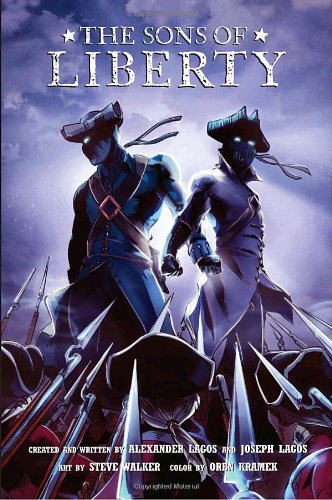 I’ve been spending the weekend at the SCBWI 2010 Summer Conference and yesterday listened to Nick Eliopulos’ session on writing, illustrating and publishing graphic novels, a segment of the publishing industry I know pretty much nothing about.

As a relatively young form that’s growing in popularity,  even the industry professionals are still on a steep learning curve to discover the most cost-effective way to produce them. 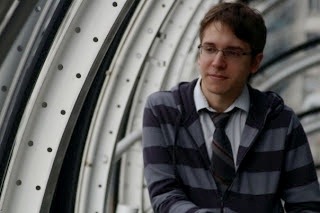 Nick Eliopulos is an Editor with Scholastic, following a 5-year stint with Random House Children’s Books. He has edited many middle-grade and young-adult titles, including the Tapestry series, The Pricker Boy, Unfamiliar Magic, and the forthcoming Sons of Liberty graphic novel. He has also worked on chapter books, cutting his teeth as an assistant on the Magic Tree House series.

Nick began by informing us that there’s been a huge increase in the number of graphic novels being published, though it’s still a new idea to many.

The story requirements of the form are fairly obvious—the premise should be inherently visual and preferably high concept. For example:

Unlike the picture book market, editors prefer the streamlined process of working with only one person for both the script and the illustrations. An example of a reason for this is that a writer with no illustration awareness might write that a character blinks, but to represent a blink an illustrator would have to draw three illustrations: one with eyes open, one with them shut, and another with the eyes open once more. But what a waste of page space! And very expensive. And not particularly interesting for the reader to experience.

Nick encouraged writers to attend comic-cons to find an illustrator willing to prepare sample illustrations prior to submission to a publishing house to give a sense of the project’s potential. Five to twenty pages of art would be a standard submission to include with the script.

He also used quite a bit of filmmaking terminology, further emphasizing the visual aspect of this art form. Manuscripts are referred to as ‘scripts’ and it’s acceptable to include some stage directions for the illustrator, such as “Worm’s eye view of…” though he cautions against intruding too much on the illustrator’s creativity. The word “choreography” is often used for highly visual scenes like fight scenes, indeed, for any scene where a large number of characters are present and need to be ‘blocked’.

Some of the biggest differences between traditional and graphic novels lie in the pacing of the story. Page ends (at what point in the story to allow a page turn, and what you want the reader to see on the next spread) are a key to maintaining and focusing the reader’s interest.

The illustration of graphic novels is a laborious and time-consuming process, with most of the editing work done during the ‘pencils’ stage, before the illustrations are inked and colored. Digital ink technology is making a huge difference to the ability to edit late in the production, but not all illustrators are working with it yet.

Coloring has now gained in importance and is often done by a specialist. Projects for younger audiences use a lot of bright color, while older teen audiences can enjoy mostly black and white illustrations with one contrasting color. The source of light in an illustration is much more important now than it ever was in the heyday of comic books. The use of candlelight in historical graphic novels is one example.

Lettering is another specialist job, adding another stage to the production time. Here there are considerations such as where to place emphasis (perhaps by highlighting with bold lettering) to imply sarcasm, for instance.

The upside of all this is that marketing and sales has a deep well of illustrative material to draw from in producing marketing material and online promotion.

Violence is a more sensitive subject in graphic novels and can be censored Images are, by their nature, more ‘graphic’. While it’s hard to find the controversial bits in 80,000 words of a traditional novel, a quick flip through a graphic novel will easily reveal those more risque elements.

The most eye-opening information Nick shared was just how long it takes to produce a graphic novel—on average about two and a half years from acquisition to publication—and how expensive they are to produce, necessitating a detailed Profit and Loss statement to be compiled before approval for purchase can be given.

For this reason, the genre favors ‘high concept’ premises as much as the movie and video game industry, though the marketing is opening up from the expected sci fi/fantasy/mystery genres to include projects as character driven as SMILE, in which a teenage girl struggles with getting braces on her teeth for the first time.

New challenges and opportunities are emerging along with the digital revolution in e-books. Can graphic novels include features such as ‘zoom in’ on certain illustrative panels without upsetting the carefully choreographed illustrative storytelling? Does the animation of certain panels create a potential rights issue nightmare should the author wish to sell the movie rights?

Another problem is the confusion of where to place these highly illustrated novels in the bookstore. Do you put them in the YA/Early Reader/Middle Grade sections? Or have them rub shoulders with Manga and more adult material?

Regardless of the challenge involved in achieving profitability with an inherently expensive form of production, the interest level from the publishing industry is high for the right projects, particularly for stories with series potential.

Some agents working with graphic novels:

Links from the SCBWI Summer Conference: