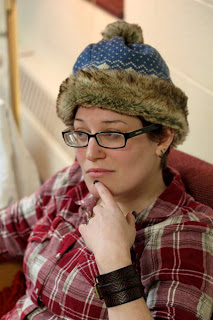 In an episode of Family Guy, main character Peter responds to someone calling him a “degenerate” with the following line: “A degenerate, am I?  Well, you are a festizio!  See, I can make up words too, Sister.”  I’m only somewhat embarrassed to admit that this quote popped into my head the first time I heard someone use the term “objective correlative” in a writing workshop at Vermont College of Fine Arts.  It didn’t help that the person said it too fast, leaving this abashed writer to ask, “What’s an object of Cruella de Vil?”

As it turns out, the objective correlative is neither a Disney antagonist’s prop nor a phrase created to make fledgling writers feel like fools.  The objective correlative (O.C.) can be a writer’s best friend, particularly in this precarious world of “Show, But Don’t You Dare Tell!”  So what the heck is an objective correlative?  T.S. Eliot (author, poet and in this writer’s opinion, a brilliant, brilliant man) investigated the O.C. in his essay, “Hamlet and His Problems.”  He wrote that it is “a set of objects […] which shall be the formula of [a] particular emotion.”  He goes further to say that the O.C. is “the only way of expressing emotion in the form of art.”  That seems a bit extreme, but the O.C. is a goldmine when it comes to illustrating sentiments without spelling them out.

So what does an O.C. look like?  My favorite example is taken from J.D. Salinger’s The Catcher in the Rye, wherein the reader cannot escape the main character, Holden’s, red hunting hat.  Holden’s focus on the hat makes it an endowed object, but Salinger goes further, using the hat to subtly evoke the pain of Holden’s brother, Allie’s, death.  In the beginning, Holden tells the reader, “I’ll tell you the kind of red hair [Allie] had.  […] I remember once, […] having a hunch that if I turned around all of a sudden, I’d see Allie.  So I did, and sure enough, he was sitting on his bike outside the fence – there was this white fence that went all around the course and he was sitting there, about a hundred and fifty yards behind me, watching me tee off.  That’s the kind of red hair he had.”  Holden is not over his brother’s death, but instead of dragging down the plot with sad memories, Salinger uses the red hunting hat to keep Allie’s distinguishing feature, and therefore Allie, in the reader’s mind.  In essence, the object, a.k.a. the hat, is correlating Holden’s unspoken grief.  Hence the objective correlative.

More than likely, you are already using the O.C. without realizing it.  Whenever your character turns from a fight between family members to focus on a crack down the middle of a windowpane, you’re using an O.C.  You’re showing that he’s divided without telling ~ an act which defines that great difference between creating an emotional reaction in the reader and relaying one.

C. M. McCarthy writes fiction for all ages as well as poetry and screenplays. She earned a BA in Creative Writing from Ohio University, a grad certificate in screenwriting from UCLA and a MFA in Writing For Children & Young Adults from Vermont College of Fine Arts (Class of Jan. 2011). If you have any questions or comments about her post or VCFA, you can contact Cori at [email protected]