And Another Thing… (about books for boys) 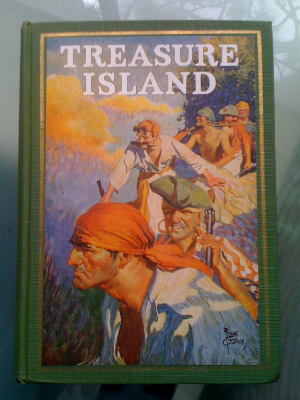 Look at old editions of Treasure Island, Kidnapped, or any number of books from earlier eras and the cover illustrations make it clear from the outset that they don’t pander to girls at all. They are boldly, unabashedly male.

Yet today, the rightful heir to Jim Hawkins is nowhere to be found. The quest for masculinity has become un-PC and our boys are confused.

My friend and intellectual soul-mate, editorial assistant Jae-Jae Jones, has addressed this subject from a publishing standpoint on her blog, Uncreated Conscience, and quotes Scholastic editor Arthur Levine as saying, “I don’t believe there are ‘boy books’ or ‘girl books’. I believe there are simply good books.”

As much as I admire Arthur’s ability to spot a good story, he’s wrong. There are boy books. There have always been boy books. Until recently.

When Robert Louis Stevenson drew a map to amuse his stepson in the winter of 1881, he began to write chapters to go with the map, writing at the rate of a chapter a day. He wasn’t writing with a broad audience in mind. He was writing for his stepson.

What’s more, Wikipedia’s page on Treasure Island states that Stevenson’s stepson “insisted there be no women in the story, which was largely held to with the exception of Jim Hawkins’ mother at the beginning of the book.”

Here’s an excerpt from the introduction to my 1924 edition of the book: “It was, of course, for his stepson that he wrote, and the test of the story’s value was whether it was interesting to the boy. But as the author read each night the chapter he had written that day, he aroused the interest of other members of the family. Stevenson’s elderly father listened as carefully as the small boy for whom the story was written.”

Stevenson didn’t set out to tread neutral gender waters, and he didn’t set out to write for all tastes. He set out to write a story that would enchant a BOY. It just turned out that the rest of the world recognized it as a great adventure yarn and coming-of-age story in its own right. But the coming-of-age journey in this story is male and was always intended to be that, first and foremost, from the story’s conception.

It’s interesting to note that early covers only feature men on the cover. Even the point-of-view character, the teenage Jim Hawkins, is absent from the cover.

If bookstores and libraries ever evolve and create an area in the bookstore where boys can feel comfortable browsing for books they’d better not use the word ‘boy’ in any of their signage. Because boys aren’t aspiring to be boys. They’re aspiring to be men.

What’s sad is that so many grown women are almost exclusively reading books geared towards teenage girls.

Update: This article was cross-posted to Reading Teen.com for Teens Read Week and engendered a lot of fascinating further discussion in the comments. Take a look…

The illustration for this post are from my childhood copy of Treasure Island, illustrated by Frank Godwin, published 1924.