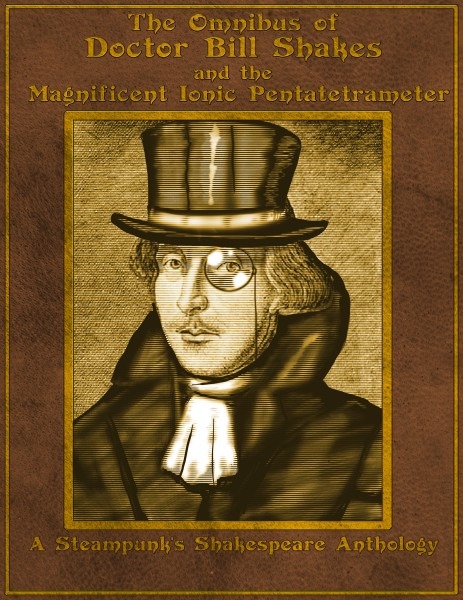 During an animated #SteampunkChat last Friday we discussed those who have jumped on the Steampunk bandwagon by merely tacking Steampunk elements on to a story that could live very well without them. Our attention then turned to whether Shakespeare’s plays could be adapted as Steampunk short stories. The puns flew far and wide, but the idea caught on and Flying Pen Press stepped in with an offer to publish a Steampunk anthology of short stories adapted from the Bard’s plays and sonnets, inviting me to co-edit it.

Submission guidelines for “The Omnibus of Doctor Bill Shakes and the Magnificent Ionic Pentatetrameter: A Steampunk’s Shakespeare Anthology.”

From Hamlet as half-man half-machine to Henry V at the helm of an army of men in steam-powered mechanical suits, the sky is the proverbial limit for adapting William Shakespeare’s classic plays and sonnets to the Steampunk aesthetic.

This is not intended to be a series of mash-ups, like Pride & Prejudice & Zombies, but rather re-inventions of the classic Shakespearean stories and sonnets. You are free to adapt Shakespeare’s language and themes to a Neo-Victorian setting as you will, but unlike the typical mash-up, you don’t have to include every line of original text from your chosen play or sonnet.

We prefer stories where Steampunk elements and themes are thoughtfully applied to Shakespeare’s works. Do not simply throw automatons into Hamlet or Steampunk technology into Richard III; consider how such technological changes may reinterpret the original stories. Saying it another way: What new insight will your Steampunk version of Shakespeare bring to the Bard’s original works?

Payment is a percentage of the royalties If there are any questions about these guidelines, anthology co-editors Jaymee Goh, Lia Keyes, and Matthew Delman may all be contacted via The Steampunk Writers & Artists Guild webportal at http://www.steampunkwritersguild.com.

NOTE: This anthology will be released through the Steampunk Imprint of Flying Pen Press (http://FlyingPenPress.com) as both a print book and an ebook.